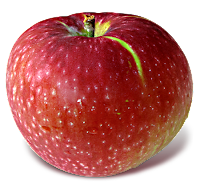 Characteristics
Paula Red apples are an attractive fruit with dusty red colored skin covered in gold spots and aromatic flesh. They have crisp white flesh that is juicy. The flavor is both sweet and tart, with a hint of cherry.  If you like McIntosh or Cortland give Paula Red a try. Uses: fresh eating, cooking, great for applesauce; mix in pies with another firmer apple.

History
Lewis Arrends discovered a Paula Red tree as a chance seedling in 1960 in Sparta, Michigan. He named the new variety after his wife Pauline. Paula Reds appeared on the market in 1968.

Parentage: This variety is thought to have originated from mcIntosh, but its exact parentage is unknown.