It's raining here this morning, so I am in the office right now working on non-field work, and later some potting in the basement--those nasturtiums are fast growers! It has been raining off and on for quite a few days, and we pop out there and do what I generally refer to as speed-farming, getting as much done as possible when the soil isn't too wet. While most things are on track, there are a few plantings we are still  patiently waiting to get done, which sounds like the story with most of our farmer friends and mentors.

All the tomato and pepper transplants were move outside to start hardening off for planting in the field--it's exciting to be at that point in the season. A point in the season that is less than a month until we start deliveries! We had a great Preseason Member Meeting on May 15th; with a third of our membership in attendance we were very happy with the turnout.

Many transplants are headed out to the field these days--like these vigorous cucumbers Brooke planted this week. 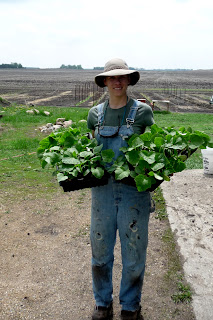 This is the first seeding of beets, the second was planted this week. There are two varieties--as visible by the difference in color. Once they get a little larger they will get thinned out. Multiple successions of plantings allows us to provide consistent product during the delivery season.


(Above) The potatoes all emerged this week--thank you rain! It was interesting to see the early season variety come up first, then the mid, followed a few days later by the late season varieties. The yellow onion and parsnip bed (below). When the parsnips begin to germinate the mulch will be pulled back to weed these sensitive crops. 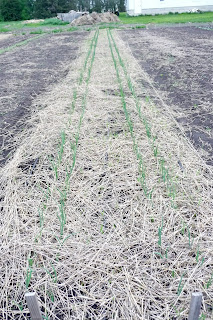 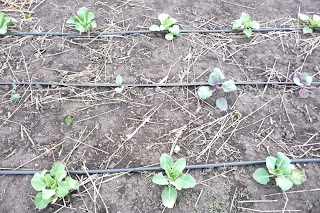 Spring cabbages (above) with drip irrigation. The leaves that look a little rough (yellowed) were impacted by sunscald--it's amazing how tough plants are that they can loose so many leaves and just keep on plugging on. The rain gave the beans (below) and corn a good push--all bean varieties planted are now germinating, as is the sweet corn! 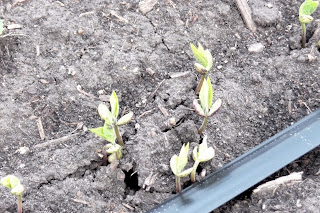 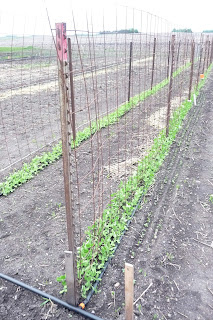 Two 75' rows of peas, complimented by their friends the radishes :)

Our oldest, and only home orchard tree this large is blooming this year! Thanks to a much needed pruning job, and new apple trees we may have a few Honeycrisp to enjoy at home this year. Apple trees will not produce unless there is at least two, and this was the lone one that came with the property.

Posted by Alternative Roots at 8:55 AM